Campus Martius Park has delivered on its promise to be Detroit’s Gathering Place, exceeding expectations in every way. New development surrounding the Park from street level cafés to the Compuware and Quicken Loans Headquarters and One Kennedy Square Buildings now frame what has become a vibrant city center.

The Park has become the community gathering place for its immediate neighborhood, and the entire city. It is a place where everybody comes and is welcome; from the corporate lawyers, to the downtown residents. The Park celebrates and embraces diversity every day; a model for the Detroit region.

It is Detroit's, and the region’s, signature downtown square, as Rockefeller center is to New York City. More than any one public space in the region, the Park continues to attract high-profile events and activities that showcase Detroit to the world.

Campus Martius Park generates positive press for Detroit locally and internationally and is the most active pedestrian place in downtown Detroit year-round because it attracts people on a daily basis.

In 1788, Campus Martius served as a drill ground for militia training. Campus Martius means "military ground" and was named after the Campus Martius at Marietta, Ohio, a 180-foot stockade.
After the fire of 1805, Judge Woodward was appointed to oversee the plan to lay out the streets, squares and lots with the assistance of the best surveyors from Canada. They placed their instruments and astronomical devices on the summit of a huge stone. He viewed the planets and meteors in order to determine "true North". Today we still call this point the "Point of Origin" which is located in center of Campus Martius at the junction of Woodward and Monroe. It is from this point that the City of Detroit’s Coordinate system was created.
Campus Martius at that time was very low and marshy. It was very undesirable for building and the land was considered of little value. In 1847, the common council raised it considerably by filling it with 100 yards of earth. In 1861 colors were presented to the First Michigan Regiment at Campus Martius before heading off to Civil War duty.

Six nationally recognized design firms were solicited to design the Park through a RFQ and RFP process. Rundell Ernstberger Associates was the unanimous choice of the Task Force and was subsequently approved by both Mayor Archer and Detroit 300 Inc. in May 2000.

Mayor Archer presented the Park plan to the public on March 16, 2001.

In August and September, 2003, the Mayor's office and the City Council approved the Park Construction and Operating Agreements with Detroit 300 Conservancy. The construction of the Park was completed for the Park's Grand Opening on November 19, 2004.

Construction began in May of 2003 and was completed in November 2004. 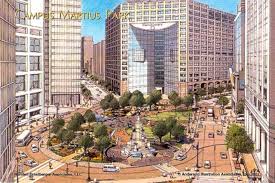